The bank automation expert KEBA, based in Linz/Austria, has scored a major success within the Raiffeisen group Austria: KEBA is to become the exclusive supplier of non-cash terminals (account service terminals) and cash recycling systems.

In March 2016 the Austrian Raiffeisen bank group, which comprises of over 400 independent Raiffeisen banks as well as eight regional headquarters, asked renowned manufacturers from all over the world to submit an offer for their self-service terminal equipment. As well as product and technology, the assessment covered factors such as maintenance and cooperation.

KEBA came out top against its competitors in the non-cash and cash-recycling ATMs sector and was subsequently awarded the order for up to 700 account service terminals and 300 cash recyclers in July.

"We are delighted about the level of trust, which the Austrian Raiffeisen bank group has placed in us. We already collaborated with Raiffeisen in the past; which makes it all the more gratifying that this partnership will continue in the next few years and will be further developed in the cash recycling sector“, states Gerhard Luftensteiner, KEBA’s CEO.

This most recent decision means that cash recycling in the Raiffeisen sector will now be extended nationwide. The realization of new branch concepts justifies the use of cash recyclers, which will optimally support the Raiffeisen branches with the latest in technical standards (e.g. NFC readers, QR code support, etc.). 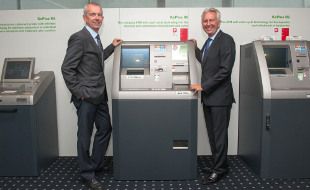 KEBA Board of Directors (from left to right): Franz Höller, Gerhard Luftensteiner © APA 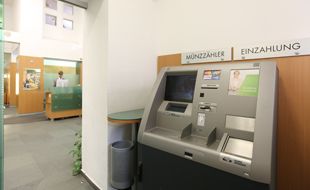 KEBA ATM at the Lofer branch of the Austrian Raiffeisen bank