The family-run company RAUCH is a global manufacturer of agricultural and municipal technology which has always relied on innovation. 400 national and international patents and patent applications, as well as numerous awards, speak for themselves.

RAUCH recently began using the KeMes angle measuring instrument from KEBA for sheet metal processing and has been consistently delighted. "From the very beginning, the measuring technology appealed to me: non-contact measurement and the flexibility that brings with it. Our employees no longer have to set the sheet metal part aside for angle checking. You can already see during bending or immediately after in the up-stroke of the machine whether the angle is correct," says Martin Herrmann, shift supervisor for mechanical processing at RAUCH. "This angle measuring instrument enables us to maintain consistent quality control throughout the work process."

The laser measuring device also provides an extra advantage for colleagues who work with the automatic bending cell and who must also manually check parts bent by the robot for quality assurance. Here, the operating principle of the new angle measuring instrument provides employees with a great ergonomic advantage. Says Martin Herrmann: "My colleagues can now stand more freely when measuring the large, and in some cases very heavy parts produced by the robot. Before, they were very often under the suspended load during angle checking and had poor visibility of the area to be measured. With KeMes, a 'blind measurement' can easily be performed and the angle value can then be read comfortably on the display."

For the agricultural machinery manufacturer, sheet metal processing plays a central role, since bending or forming is usually one of the first manufacturing steps for machines with working widths of up to 36 meters. Maintaining angular dimensions is especially important with regard to the subsequent steps.

Improved safety for the inspection of sheet metal parts

Using the new angle measuring instrument has also improved quality control at RAUCH. "When manufacturing critical components, each individual part must be checked precisely, because only in-spec parts can be used in the rest of the process. With KeMes on the machine, we now have more certainty for this 100% inspection, which also gives us a stable series production process," says Martin Herrmann.

RAUCH is now using two KEBA angle measuring instruments in production: "We have successfully integrated the new measuring instruments into our production processes. One of the devices is a permanent part of the equipment for our automatic bending cell. The second device is used on our conventional press brakes – especially for producing parts that must be reliably assembled later on in the process."

Quality assurance has an especially high priority in the manufacturing of RAUCH's high-tech products. A reliable angle measuring system is indispensable here – in keeping with RAUCH’s slogan "Master in precision. "

This article appeared in BLECH issue 5 | 2019. (only in German language)

The complete article can be downloaded here and at blechonline.de (only in German language) 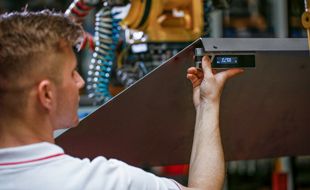 In hand-guided operation, even 'overhead measurements' can be performed quickly and easily with this measuring instrument. 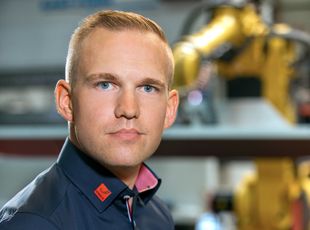 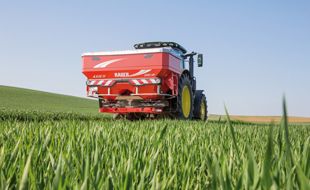 Reliable quality controls are essential for machines with working widths of up to 36 m.