Our glossary is regularly updated with new terms. So it's worth checking back here from time to time!

AC is short for ‚alternating current ‘. In alternating current, the direction in which the electrons flow—the polarity—changes fifty times per second. The public power grid uses AC, as it allows for a low-loss voltage change, which is an advantage for transporting electricity across long distances. So, the home socket provides alternating current. The battery of an electric vehicle, however, requires direct current (DC). That’s why each EV has a rectifier installed that converts AC into DC when charging at AC charging stations such as a wallbox. If energy is taken out of the battery, an inverter converts DC back into AC, as the electric motor requires it.

The battery capacity is the storage capability of a battery. The battery is the equivalent of the fuel tank of a vehicle with a combustion engine. The higher its capacity, the further you can drive with comparable consumption. It’s important to differentiate between gross and net capacity. Unlike the fuel tank, a battery cannot be fully emptied; a certain percentage remains unused. Net capacity describes the usable capacity, gross capacity the theoretical capacity. An electric vehicle’s battery dimension—like with energy consumption—is measured in kilowatt hours (kWh). For instance, if an e-car consumes 15 kWh per 100 km, a battery with net 50 kWh will take you about 330 km. If the battery capacity is at net 75 kWh, a distance of 500 km is possible with a fully charged vehicle.

BEV is short for ‚battery electric vehicle‘. When we talk about these vehicles, we often only say ‚EV‘ (electric vehicle). Strictly speaking, this is incorrect. Because EV is the umbrella term for all vehicles with an electric power system, from e-scooters to fuel cell electric vehicles (FCEVs). The difference is in the way they store energy. While most EVs now use a battery as their storage medium (BEVs), vehicles with fuel cells use hydrogen or methanol. What all EVs have in common is that they are powered by a purely electric system with one or more electric motors—some are fed with electricity from batteries, while others use tanks and a fuel cell that generates electric energy on board.

CCS is short for ‚combined charging system‘, which describes the connector standard or the plug system of modern e-cars. CCS allows for charging with both alternating current (AC) via a Type 2 connector at home or at work and direct current (DC) with higher charging rates at compatible fast-charging stations. The combined inlet consists of a top inlet for Type 2 connectors with a maximum of five contacts for 3-phase alternating current charging as well as two signal pins and a bottom connector with two contacts for direct current charging. Currently, the CCS system allows AC charging of up to 22 kW and DC charging of up to 350 kW.

Charging power is an important factor for the charging speed. Mainly limiting the charging power, along with various external factors like outside temperature, charge level, and the charging station’s power, are the battery’s constant internal factors (size, cell chemistry, and architecture) as well as the charging management. Ideally, the limiting component is always the vehicle. So, the charging power of e.g. an e-scooter is only a few kilowatts, while other e-vehicles are able to handle the power of more than 300 kW. Since a battery can never be continuously charged with high power, these figures are maximum values—a peak performance that can only be held over a few short minutes. What’s more significant is the average charging power, especially at a state of charge (SoC) between 10 and 80 percent. In practice, however, the loading system is often a power limiter. The power (P) is the product of electric current (I) and voltage (U). A domestic wallbox with a 3-phase plug therefore has a maximum output of 16 A × 3 × 230 V = 11 kW. This is sufficient for charging overnight and preserves battery life. DC fast chargers, on the other hand, can generate power of up to 400 kW in theory (500 A × 800 V) and are therefore the best choice when it comes to travelling long distances.

Direct current (DC) is when the electrons flow in one direction only. Batteries deliver direct current, and so do photovoltaic systems. If consumers are plugged in, the electrons travel from the anode (minus) to the cathode (plus). The public power grid, however, operates with alternating current (AC), as it allows for a low-loss voltage change. This is why a rectifier is needed when charging electric vehicles with alternating current, for instance via a wallbox at home. The rectifier turns alternating current into direct current, AC into DC. Every e-car has one. If energy is drawn from the battery, an inverter converts DC back into AC, as the electric motor requires it.

‘FI circuit breaker’ or ‘FI-protection switch’ are still common terms for a protective device that interrupts the circuit in the event of a fault current. F stands for 'fault', I for the physical unit of the current intensity.  In the meantime, one speaks of a residual current device, abbreviated as RCD (for 'Residual Current Device').  The RCD detects if something is being lost in a current circuit. In a closed circuit this may not be the case. Thus it protects humans (and animals) from being exposed to large currents permanently. If, for example, current is dissipated through the body by contact with a conductor, a so-called differential current is generated. If this is too large - the maximum value is specified on the RCD as In - the circuit breaker interrupts. All KEBA wallboxes are equipped with DC leakage detection. This significantly reduces the costs of the installation, since only one type A RCD needs to be installed instead of an expensive type B RCD.

W stands for ‚watt‘, the unit with which to measure the physical quantity of power (P). While a dustbuster might need 700 W, much higher power is required to drive a car. To keep the figures manageable, we use the unit kilowatt (kW), which is equal to 1,000 watts (≙ 1.36 hp). Two power categories are important for battery electric vehicles: the driving power (the engine power) and the charging power, which is an essential factor when talking about charging speed. The maximum theoretical charging power is limited by the charging station’s output (in a domestic socket that’s only 10A × 230V = 2.3 kW) as well as the battery or the vehicle’s own charge management. The limits diverge wildly and range from a few kilowatts to more than 300 kW.

Wh stands for ‚watt-hour‘, the unit with which to measure how much energy a system consumes or gives off per hour with the power of one watt. In the context of battery electric vehicles, it is used mainly to indicate the battery capacity. To keep the figures small, we use kWh (=1,000 Wh) instead of Wh. A battery with a capacity of 50 kWh is capable of giving off the power of one kilowatt for fifty hours. This is a theoretical value, as the engines especially of electric cars release far greater power—when accelerating over short periods of time this could be several hundred kW, depending on the vehicle type. Yet the theoretical value illustrates well how a battery with twice the capacity can also give off energy for twice as long and can thus also store twice as much energy.

RCCB is short for ‚residual-current circuit breaker‘, which is still often called by its older term RCD (residual-current device). It is a safety device that breaks an electrical circuit in which leakage current has been detected. The RCCB identifies a loss in the electrical circuit. In a closed circuit, loss is impossible. And so, the RCCB protects people (and animals) from long exposure to high currents. If a person touches a conductor and electricity discharges into the body, it leads to so-called “residual current.” If it is too high—the maximum value is noted on the switch as In—the switch breaks the circuit. All KEBA wallboxes are equipped with DC leakage detection. This reduces the installation costs considerably, as it requires only a Type-A switch instead of the expensive Type-B RCCB. 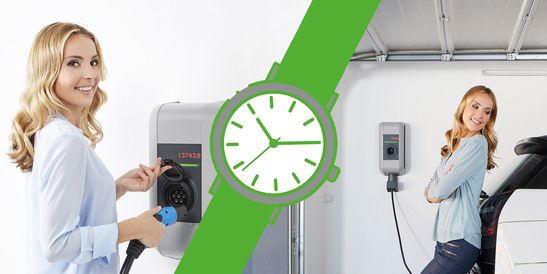 How long does it take to charge an EV?

People often cite charging time as a major shortcoming of electric vehicles. However, the duration is dependent on many factors and can range from a few minutes to several hours. Find out below what causes such big divergences and why the actual charging time is irrelevant in most cases. 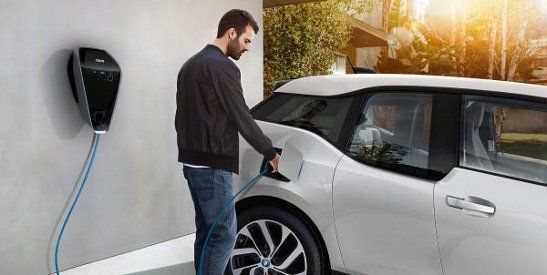 With the delivery approval and the start of series production of the new BMW i Wallbox manufactured by KEBA, cooperation between the Austrian automation specialist and the German premium car manufacturer is official.

Cooperation with Loxone for the smart home of the future

Environmentally aware owners of electric vehicles will be connecting their KeContact P20 wallbox to the Loxone Smart Home System in the future. The car is charged depending on the energy output of the photovoltaic system and the consumption of the rest of the house.